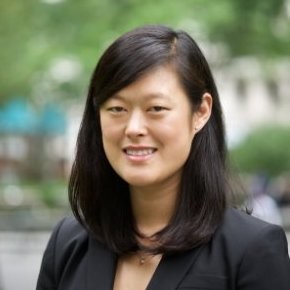 Diana is the Program Director for the Pershing Square Foundation, where she is responsible for program management, grant administration, communications, and due diligence. In her current role, Diana is focused on managing the foundation’s portfolio of grants, building new partnerships, and offering strategic support to grantee partners.

Diana joined the Foundation from Seoul, South Korea where she was a Consultant at MYSC. There she supported entrepreneurs in Southeast Asia, lectured at universities on design thinking, and helped adapt frameworks to measure social impact.

Diana has a background in community-economic development and entrepreneurship. While receiving her graduate degree, Diana worked at the State Department in Lima, Peru and developed a case study on public-private partnerships at the William Davidson Institute. Diana was a Fulbright Scholar in Bucaramanga, Colombia and has worked on community development issues in Newark, NJ. She was a Term Trustee of the Asia Foundation (2017-2019). Diana is currently teaching at Glasgow Caledonian University’s New York campus.

Diana graduated from Rutgers University’s Bloustein School with a BA in Urban Planning and Public Policy and holds an MPP from the University of Michigan’s Gerald R. Ford School.