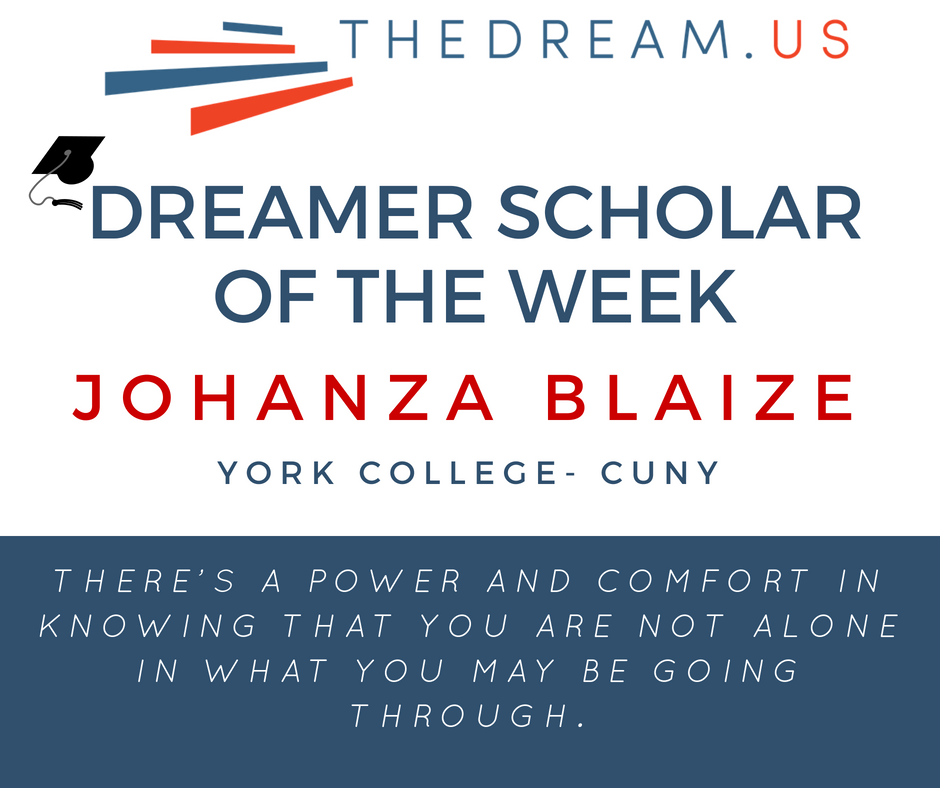 Johanza Blaize, 18, from New York, born in Trinidad and Tobago

There’s a power and comfort in knowing that you are not alone in what you may be going through. In high school, I co-founded an immigration awareness group called the “Alienated Aliens” to unite all of the seniors who were undocumented. We felt doing this in our senior year was essential, because we were all about to start college applications. Everyone in our grade was scurrying to fill out their FASFA, sign up for the military, and start their scholarship letters, but these were all things I wasn’t fully eligible for. Before starting the organization, I had no idea that I wasn’t the only one with this problem. I created the group to motivate and encourage students that had to work past the same struggle that I was going through. I wish I had started the club sooner, because it is not just seniors that have this problem, but freshman, sophomores, juniors, and even middle schoolers who struggled in silence. We learned about each other’s fears and accomplishments and grew from each other’s’stories and experiences. I’ve always known I was different in some way, but it wasn’t anything I worried about or ever afraid to share. I was raised to appreciate and love diversity and uniqueness. What I was not aware of was how being ‘different’ would affect me as I grew older. My sister and I were born on the island of Trinidad and Tobago, but my mother and father brought us to American soil when I was 2 years old. As children, we never understood why we left our home country, but now that we are older we understand why our parents decided to make such a big leap — they hoped for better opportunities in the Big Apple. My family’s adjustment to America was far from lollipops and rainbows. We struggled to get food on the table, my parents went through a serious rough patch when it came to their marriage, and the only family members we have here are hundreds of miles away. And coming to America shortly after 9/11 made our situation even more difficult — but we never lost faith. For the past 16 years, we’ve been struggling, but we’ve also been surviving. Being DACAmented has made me feel a little less like an outsider. Even though it’s okay to stand out, I now fit in a little more. More doors have opened for me and some things, like finding a job and paying taxes, have become so much easier. Through DACA, I received my work authorization card and social security number, and I applied for my first job without any issues. I can proudly say that Jesus Christ played a strong role in my family’s life. Without Him, we wouldn’t have received any of the blessings that He has given us. Even though we had no food, our church at the time ordered boxes and boxes of food goods to be delivered to our home on a monthly basis. My father then received a job that relieved most of the burden. We didn’t struggle as much as we use to. Our life has been a rollercoaster and the ride still has a long way to go, but we’re going to stick through it till the end. I believe that higher education for DREAMers is important, because it’s a way for boundaries to be broken. Before I received TheDream.US scholarship I didn’t see myself going to college,
simply because I didn’t have the funds to pay for college. But because of TheDream.US, I was able to imagine myself as a college student. I didn’t see myself getting too far, especially without a college degree, but I’ve been given the chance to walk through some open doors. I love learning about and working with technology, and I can recognize the value of education — it gives you that option to excel and to accomplish new things. TheDream.US scholarship gives young individuals a second chance, a chance to prove their worth. I want to encourage others to know, “There’s always a way. YOU are living proof of that!”