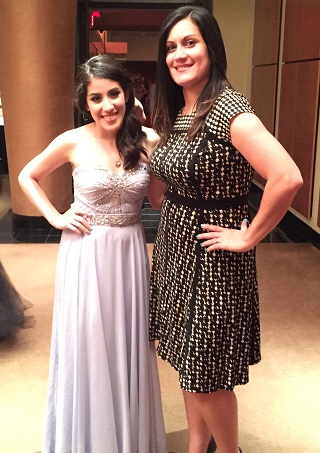 As a young child, Maria Rosales would observe her grandparents or other family members being sick and feel a strong desire to figure out what was wrong and help them get better. “Obviously, as a young kid, I couldn’t [do anything] so I would just research what they had and how it can be fixed,” she says.

This medical curiosity and passion for helping others has flourished in Maria, now a freshman studying nursing at Dominican University in Illinois. She ended up in the suburbs outside of Chicago at age five, when her parents decided to immigrate to the United States from Guatemala in search of better opportunities for their children. Maria was then the middle child of three girls. The family has since added a son, who was born in the United States.

In high school, Maria enjoyed the fact that she was surrounded by a diverse group of classmates. She says, “We had a variety of different nationalities, so I was able to learn from someone who was the same nationality as I was, and from someone who was from the Middle East or from across the country.” She was president of the Spanish Honor Society, but another organization had a bigger impact on her life: OLAS. The Organization of Latino American Students at Glenbard North High School, headed by Dean Susanna Melon, served as an informational and supportive group for the immigrant student population at school.

It wasn’t until her sophomore year, when Maria received DACA, that she felt the implications of her status. “I didn’t know how difficult my situation was. [With] DACA, I understood the gravity of not being born here and not having the papers to apply to a school. I learned that…without it I would have a lot of problems applying,” she says. Higher education had always been in the cards for Maria since both of her parents graduated from college back in Guatemala. She says, “They always told me they would help me figure out how to pay because there was not an option to not go to college.”

When friends would talk about FAFSA, Maria says, “I had to just say I’m not applying for FAFSA at all because I know I will not receive anything, no matter what, because of my status…So I took it upon myself to find a scholarship.”

Ms. Melon, who was passionate about helping her immigrant students get on the path to college, realized that there was no financial aid or scholarships available for those classified as “Dreamers.” She would hold special meetings to find solutions. Then Maria came across an advertisement for TheDream.US on Facebook and brought it to Ms. Melon: “I didn’t think it was real, so [we did] more research on it… She helped me begin the application process.”

Now Maria is excited “to be taking classes for the career that I want to pursue,” and sees medical school in her future. “I want to become a doctor so that I can help people like my family that needed help in those situations…and people that don’t have the same resources as everyone else but they still need medical attention.”

Her advice for other DREAMers comes from her association with OLAS and the support of Ms. Melon in high school. She says, “Finding someone that really understands the situation and is willing to help you the same amount that you want to help yourself is definitely helpful.”