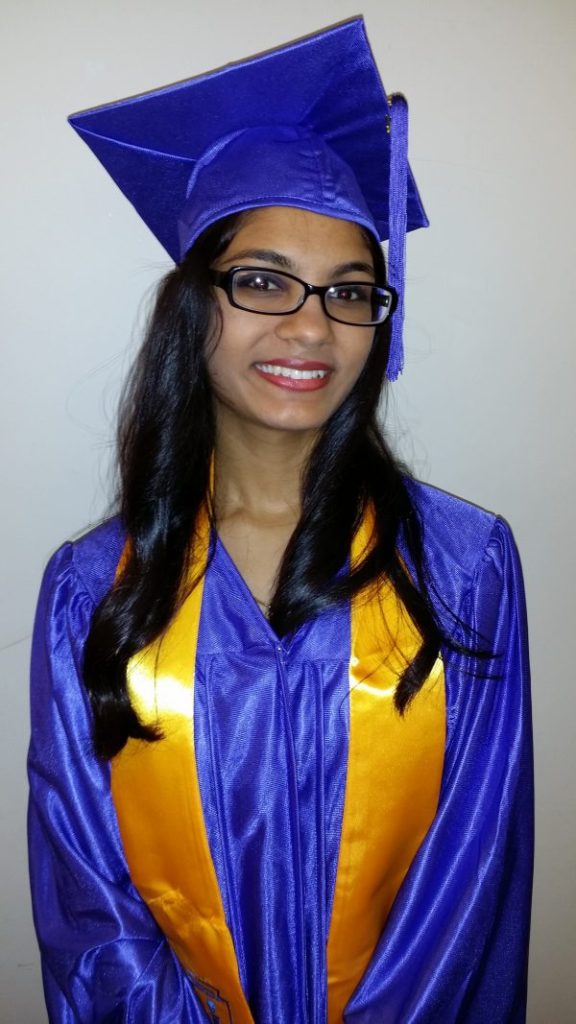 By the age of three, Mitasha Palha had already touched on four different regions of the world. She was born in Manama, Bahrain to Indian parents who temporarily worked there before moving back to Goa, India. They decided to immigrate to the United States, making a brief layover in South Korea before ultimately settling in Brooklyn, New York where Mitasha and her older brother grew up. It’s no wonder then that the DREAMer has her sights set on international travel yet again.

Mitasha attended The Brooklyn Latin School, where she excelled in academics in the International Baccalaureate Program, and served as the president of the National Honors Society. In extracurriculars, she played chess, competing against other schools, and for the past five years, she has been an altar server, lector, and teacher at her local church in Greenpoint, Brooklyn. One thing missing from her unique high school experience, though, was the ability to travel. “They had a lot of trips abroad that I couldn’t go to because I didn’t have a valid passport,” she says.

Mitasha learned about TheDream.US scholarship via posters around her high school campus and knew immediately that it was the right fit for her. Now in her second year in Macaulay Honors College at Lehman, the experience has been fantastic thus far, partly because of their Cultural Passport program. “We were able to go on different trips and explore different parts of New York that honestly, I would have never explored on my own… [like] the City Center, the Brooklyn Academy of Music, the opera at Lincoln Center. Those experiences I really enjoyed,” she says.

Originally, Mitasha was interested in nutrition, but has since found another passion. She says, “I’m interested in doing some kind of medical-related biochemistry, with pharmaceuticals or drugs.” Lab experience is a crucial aspect of Mitasha’s career plans, but her status presents a challenge. She explains, “In order to do research, you have to have lab experience of course, and I noticed that when I am applying to summer lab programs…most of them are NSF [National Science Foundation]-funded, which means they are funded by the government and they only accept permanent residents and citizens, and I am neither of those. So most of these research programs I can’t even apply to due to my status.”

Nevertheless, Mitasha is hopeful and is preparing for a new adventure on the horizon. ”I will now be traveling to Goa, India this Winter 2016 to volunteer and teach English with advanced parole,” she says. Advanced Parole allows immigrants with DACA to temporarily travel out of the United States for humanitarian or academic purposes. “This would be my first time traveling out of the country since I arrived to the States in 1999… I worked with the associate director of scholarships at Macaulay, Veronica Maldonado – she has been great help for me through this process.”

She is also grateful to her parents, especially her father. “My dad was the sole breadwinner for the family. He’s the one that works day and night, 12 + hours, 6 days a week, earning money for our family. Me and my brother, we couldn’t work until we got our DACA status.” Additionally, Mitasha and her brother are not eligible for any federal or private loans. Her parents paid out of pocket for her brother to attend Baruch College. She says, “If it wasn’t for the scholarship, they would be paying double – for tuition and books, and transportation and everything. And the costs go up… They are really grateful. And so am I.”

Throughout high school, Mitasha kept her status a secret, but now, she is more comfortable with sharing her story. She wrote a testimonial for CUNY’s scholarship section of their website and produced and edited a youtube video chronicling her journey. She says, “I used to be ashamed of telling people that I’m undocumented. But now that I’m in college…it’s something I’m not really ashamed of. Yeah, I’m undocumented, but I’m still just as American as most people. I’m still getting the same education. I don’t think it should be considered an obstacle.” She concludes:

If you really want to do something, you should go do it…I feel like that one part of me that’s different, it’s not something that should hold me back and I never let it hold me back.”