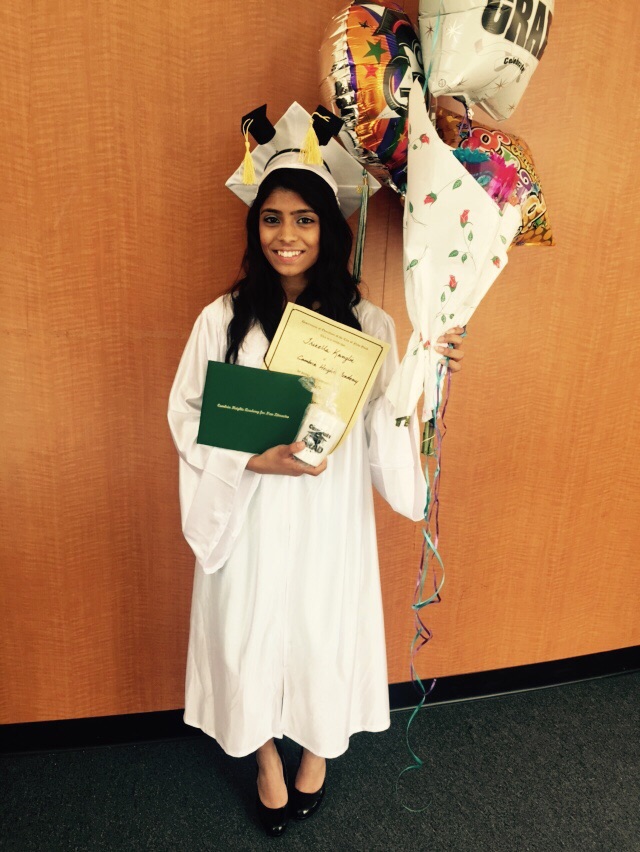 A particularly awful case of eczema brought Tricella Kanglie to the United States. She was born in Paramaribo, Suriname, on the South American continent. Her move to the U.S. at age five provided a much-needed climate change and access to the medical treatment necessary to help with the skin condition, which plagued her as a child. Her family came to New York, and the Dutch-speaking Tricella struggled with English at first. “I was in ESL for a couple months, then I adapted to the environment,” she says.

After that, she was off to a running start. In high school, she competed in track and was very involved with the running club. But her interests didn’t stop there. She says, “I joined the ballroom dancing club, global awareness club, mouse squad (a technology club), and step club.” She was also a member of the National Honors Society, and had an internship after school for two years.

Throughout this time, no one knew of her status. “I kept it to myself. I was kinda embarrassed about it because I wasn’t a true American citizen. I didn’t really talk about it that much,” she says. Applying to college was a lot of work: “The whole college application itself and applying for financial aid – I didn’t know at first that I couldn’t get financial aid, so having to go through that and finding out that I was not eligible was really hard.” She continues,

“I felt really discouraged. I [thought] what’s the point of being here if I can’t even get the same benefits as…the other people in my high school.”

Because neither of her parents even finished high school, Tricella knew that she had to make it to college. She says, “I planned to go to college no matter what it took. [Since] I wouldn’t get financial aid, it would been hard for me and my parents. So I planned to work and pay [my] tuition for college.” Just in time, a teacher sent her TheDream.US scholarship application: “She sent it to [other] kids in the school, too. I’m assuming that she knew that [we all] had a similar situation.”

From fall 2015, Tricella has been enrolled at City College of New York, studying biology. She is passionate about the medical field and plans to become a physician’s assistant after earning a master’s degree. When asked what attracts her to this field, she says, “The ability to help people with medicine; talking to them, and diagnosing them; to make someone feel good [or] saving their lives. It would be something I enjoy doing – it wouldn’t be work.”

Tackling the challenge of balancing school and work, Tricella is also wondering about her chances of studying abroad. She is particularly interested in Europe: “Maybe Barcelona, Spain. After I graduate with my PA certification license, I want to help people around the world that don’t have enough money for medical attention.”
Now, Tricella has some key advice for other Dreamers in her situation:

There’s people out there, like TheDream.US program, that will be happy to help you and they know that you deserve to be helped…I would tell them to be strong. Don’t be frustrated because everything will work out eventually.”